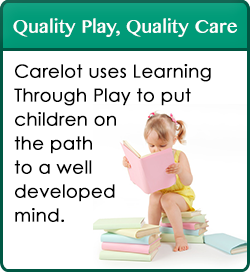 Carelot Children’s Center was founded in February 1998 as a fulfillment to a lifelong dream of Holly Vlaun Bevilacqua, now Chief Operating Officer. Larry and Holly Bevilacqua welcomed their first child into the world on July 9, 1995. Holly had a successful teaching career yet she longed to be at home with her new daughter. With her love for children and enthusiasm for teaching, Holly opened “Little Ducklings” home daycare. It didn’t take long for word to spread of the wonderful program being offered at “Little Ducklings”. Recognition for quality childcare became imperative. As lifelong residents of Waterford with a strong sense of community, a location in the heart of Waterford was found at 203 Boston Post Road. The year long process was underway to make it a state of the art childcare center that would meet their needs. Thus began the mission to build strong foundations for a lifetime of learning. Holly hired her sisters who had also chosen teaching as their professions. With only ten children enrolled and 4 staff, this family run center named Carelot Children’s Center was opened on February 23, 1998.

As Carelot’s reputation spread, enrollment increased and so did the demand to grow the business. In August of 1999, Mr. Bevilacqua took on the task of opening a second center with double the capacity in East Lyme, CT. The building was already in place physically but needed some cosmetic and aesthetic changes to meet the Carelot Standards. This center has 12 classrooms and can accommodate 165 students today.

In August of 2004, The Friendship School, a regional multicultural magnet preschool, opened its doors and the superintendent of schools in Waterford Randall Collins caught wind of Carelot’s reputation and called to personally ask them to please consider submitting a bid proposal to create the before and after school program within the school. The 2004/2005 bid was won by Carelot who created the Carelot Clubhouse at The Friendship School. After a successful first year the contract was once again put out to bid and was awarded to Carelot, over more than six competitors, for a three year term. The program is still operated at The Friendship School providing care to numerous families.

In March of 2007, Carelot began the process of opening Carelot Killingly, the third full service learning center in the Carelot Family. Under the direction of Carelot’s Vice President of Development and Marketing, Melissa Collins, the center opened in September 2007 with a capacity of 112 children. Carelot Brooklyn was found in the spring of 2007 just after the construction of the Killingly program began. This site previously served as a center and with upgrades added to meet the Carelot Standards opened in July 2007 with a capacity of 44 children. Carelot has operated Before and After School programs in the towns of Waterford and Griswold public school systems since 2007. In 2009, Carelot added Play and Learn in Chaplin, CT to its Carelot family of centers and was contracted with the New London Public School district to operate a new Before and After School program. The New London program currently operates before and after care at Winthrop School and an aftercare program at Nathan Hale School with children from Harbor and Jennings bussed to Nathan Hale.

Carelot Children’s Center continues to provide a quality program for children ages three months to twelve years. All of our centers operate using the standards set forth by the National Association for the Education of Young Children (NAEYC). Carelot prides itself on community collaborations being a part of their well thought out and internally developed curriculum. The centers and programs all provide a warm, loving atmosphere for children to learn, grow and explore at their own individual pace while be supported by a professional team of individuals dedicated to early childhood education.